There are many different plastics that are used in plastic hardware for backpacking gear.  We will take a look at the two materials that are used in over 90 percent of the hardware produced and what properties each have along with how the environment affects these materials. For backpacking hardware, plastics have made hardware more versatile and much lighter compared to its metal counter parts.  Today we take side release buckles, cord locks, and ladder locks for granted. 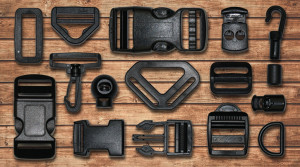 Nylon 66 was invented in 1935 by DuPont and they have found significant commercial applications in fiber, shapes and films.  Nylon was intended to be a synthetic replacement for silk when silk became scarce during WII.  It was introduced at the world fair in 1939 as the now-famous women’s stockings that have taken its namesake.  Nylon has many properties that are advantageous for making hammock hardware no to mention all the fabrics used in gear and clothes.

A hiker is clad in nylon from his shoes to his backpack. The environmental effects on nylon are minor but they are notable.  Nylon is pretty resistant to UV light, however, it can weaken it with time.  For that reason backpacking gear should be stored away from sunlight.  Nylon is a hygroscopic polymer and absorbs water.  That affects the part’s strength and stiffness along with the part’s dimension and weight slightly.  This can make side release buckles release when not wanted.  Cold has little effect on Nylon and it gets brittle at -40 F.

Acetal, also known as polyacetal and poly formaldehyde was discovered by Hermann Staudinger in the 1920s but wasn’t developed for production until DuPont made it thermal stabile and made it a processable plastic.  It is sold under the brand names Delrin, Celcon, and Ramtal. The environmental effects on Acetal in the backpacking world are mostly surrounded around brittleness.  Whereas Nylon is more flexible, Acetal has more crystalline and tends to be more brittle, especially at temperatures around -20 F. This is fine when the part does not have to flex or have much stress, however, this can cause catastrophic failure for things like side release buckles or ladder locks. Acetal does not absorb water so moist environments have little effect on it.

Check Out Our Other Hammock Camping Hardware